Just some stuff I been working on.

If anyone might be interested in me making maps for you let me know. I will give ya a great deal on it.

Here are some pics. To see more feel free to look through my turbosquid page. I post 1 new map a day. I also do 3D modeling too if you are looking for something.

Here are some more maps I been working on Posted up to TurboSquid. First one is a sand dune map. 2nd I call Thunder Mountian Range.Check them out. :) Got some more maps made. :) Nice! Is this all in 3DSMax or are you using external tools like WorldMachine or Terragen?

I am creating the maps with Geo Control 2 and L3DT. Mostly Geo Control 2. It is a really powerful map designing software. That I like more cause you can have 100s of colormaps to go along with it. I use L3DT to create the light maps and normal maps. Along with the alphas. I then toss them in 3Ds max using a plane, and displace. To create them. All in all it takes about 5 hours to create a new map. Including screenshots. The cool thing is that, In a game engine the maps usually looks even better then being rendered in 3Ds max. Because of the detail textures.

When our engine is to the point where we can create terrain I plan on making some very beautiful terrains to showcase it. That is the part I am very excited about. :D

Cool stuff! Aha I knew this was made from GeoControl all along judging by those signature weathering and erosion details. They changed the product name now to WorldCreator. I have used this before actually forgot the old name since that was years ago.

Howdy yall. I would like to show off some more of my maps here. And some 3D models I am selling on Turbo Squid. These are Realtime maps made in 3Ds max. The first one is called Grasslands. And the 2nd is called TwoSnakes. Both of them run Really well in Neo Axis. I am going to post direct links. Cause I got alot of pics.

Got some more pics. Hope yall enjoy. These are from my game. These are nice NightHawk! and finally I got to play AKLite :-)

It's good! though I think there are a lot of areas that needs some optimization and improvement on certain maps. I'm getting only 15-20fps on 800x600 resolution with a decent graphics card. I think this has something to do with those trees (alpha) on screen combined with rendered shadows, but better on other maps like dessert types which is normal.

A.I. is also good but you seem to get some advantage once you get past them and sneak up from behind.. most of the time I still get hit head on. Great all around weapon of choice though I'm still figuring out how to buy those mechs and techs as I don't have any idea how to get game money XD. A quick message or short tutorial would be more helpful before entering the level or scene. Good game overall and it was fun playing on those maps! 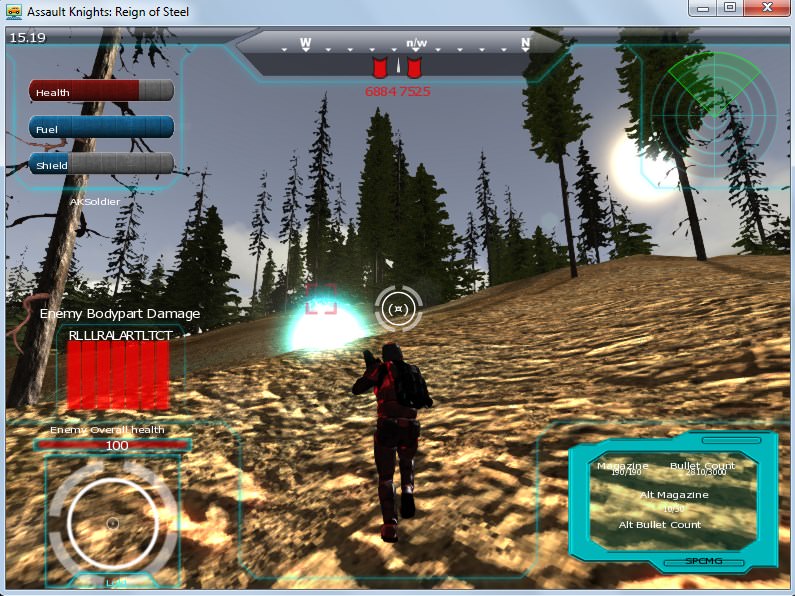 You don't have to have game money to buy the units right now. You can go into the unit buy window in the main menu. And purchase them. They are all free for now. To spawn them you need to walk up to one of the hangars and press the B button to open the spawn window. There you will be able to spawn the units. There is also customizable versions of the mechs that you can customize in the Techlab menu in the main menu too. You will be able to see weapons on the ones that you can actually customize. And spawn the variants from the B button menu in game. When you walk up to a hangar or spawn pad. Press the B button. And the spawn menu will appear. If you baught any units. You will see them there. Click the unit that you want to spawn and click the spawn button.

As for some of the maps. Yes some maps especially that one can be slow. It just depends on it. I plan on optimizing that map in the near future. But it will be in the main game.

Though once I do I can make a patch for that map. So it will run better on your system. I think I just need to take out some more trees. For some reason they kill the frame rate I have noticed.
But personally I might just wait till we have a working prototype of our engine when we get to the point where we can actually build a game type. To port everything over. Though I know that might be a year or two before that happens. But it is going to be awesome when we do. I will be able to actually code AK as well as do the designer work for it too.

Either way hope that helps with the game. For now just load up maps that you can play on smoothly for now. I will make a patch for MosshillSpikes for you in the near future.

Ah ok got it. Now I'm getting some mech action! 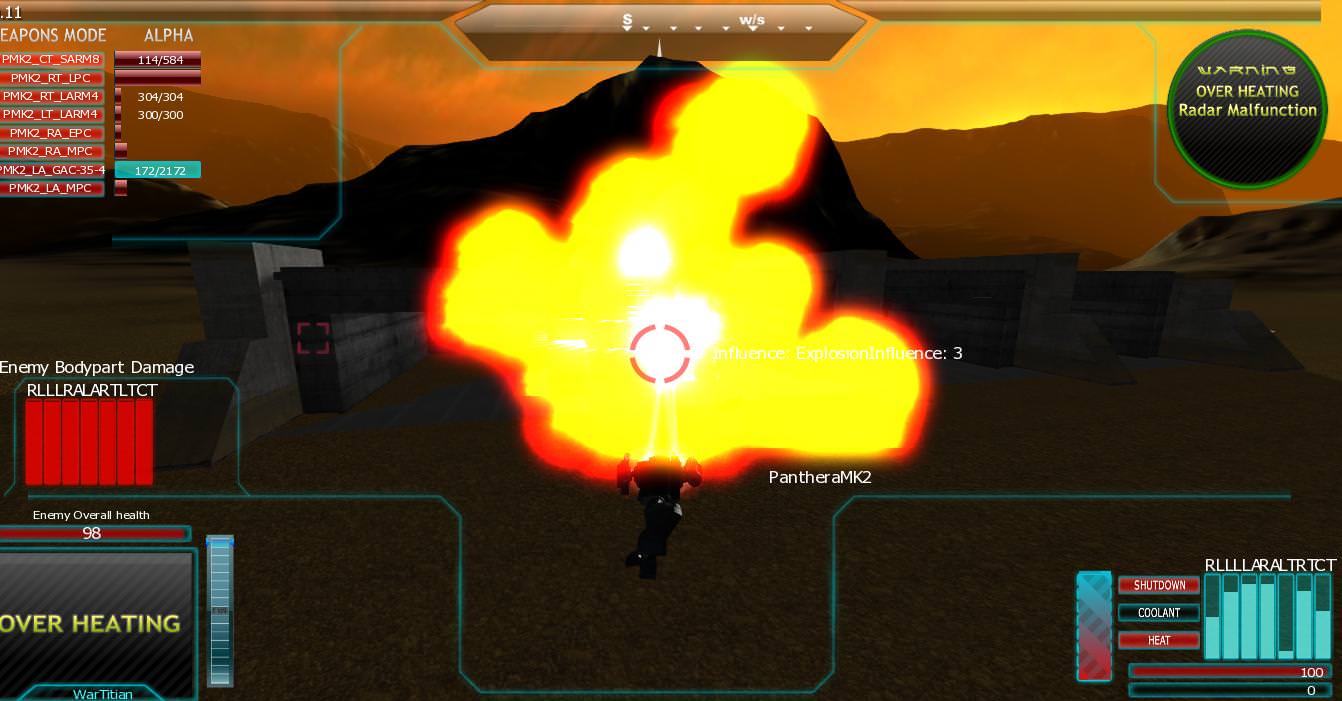 I'm not that familiar with mech mechanics (ptp), but another thing I noticed is that it seems most mech units gets easily overheated which disrupts the skirmish action. Have you already added some sort of upgrade system or are you planning to? Probably a balance between simulation and more continuous head-to-head play or I would assume the default are just stocks.

I agree and yes, just tune up a good LOD setup or tree billboarding and probably decreasing some shadow distance then I'm sure there will be a great increase in performance.

Here is some new pics of a mech called Jackrabbit. Just added it a bit ago. Thanks NRJ. :D And also welcome to the forums :)

@RonTek Sorry bro I did not notice your question till now about the game. Anyway the heating is actually part of the game. Players will be able to buy and install something called heat sinks on there units. When they have enough room and money. Each mech comes with a standard of 10 heatsinks plus what is added to the stock variant. And when it is implimented into the game. They will be able to custom add them to the unit. Though it is planned there will be a tonnage system. You will only be able to put so much stuff on the units. Until it is full.

Assault Knights is alot like Mech Warrior in that aspect. (I am a huge Mech Warrior fan.) And I am planning the game to play kind of like it. But without the headache of the background that comes with the MW universe and it's fan base lol. Also AK is combined arms. Like Mech Warrior Living Legends. A mod for Crysis. But my game is a little more arcade like as everything is a little faster then games in the MW universe. But it will play alot of the same way. And also not having a background really for the game. (Storyline.) I can add any type of mech I want. hehe.

Hey no worries and now I see. Yes, I did notice that and yes a mix of arcade and simulation or having them both as an option would be great as well for the game, probably as Game Modes? Right now with the NAxis version it is great as it is since you already have implemented most of the critical game features to make it playable. I'm sure the upcoming blitzmax+ogre version and engine will add more to the arsenal!

Yep we will have alot of new stuff as I will be actually able to code it myself too! I am really looking forward to the new BlitzMax+ogre version. I can feel it is going to be awesome! I am def preparing for it. Just need to get the editor up and running and the type system implimented. It will take years. But I am def not going anywhere. Once the core of the editor is up and running. I will focus purely on .type creation. Or what ever name we use. I also got the complete source code to the cry engine. I plan on implimenting some stuff from that too hehe. Or atleast see how they did it. Then make our own version. There is a few small features I want to add from it for sure. And it is written in C++ Which I know how to code in.So our engine will hopefully be better then Neo Axis in some time.

Yes, I'm sure we'll get into more details and focus when we move into the type system. I'm also checking out some stuff on how we can parse it easily and make it ogre3d compatible. That's great to hear, really anticipating and looking forward as well when we get into the editor part. cheers.

Those maps are AWESOME, and I love your models to.
LOL the best I have come up with so far is a crappy 3d LOTR map..with some sprite characters in walking around.. looks like playschool compared to what you can do.
Keep up the good work.!.