So I was making an RPG using a different tool(RPGWizard) and thought to myself I need a Sprite sheet creator and after having a look around I didn't find anything that met my needs so I decided to make my own.
Its made using Blitz3D and all sprites are made by me and my girlfriend.
here is an early video of it working 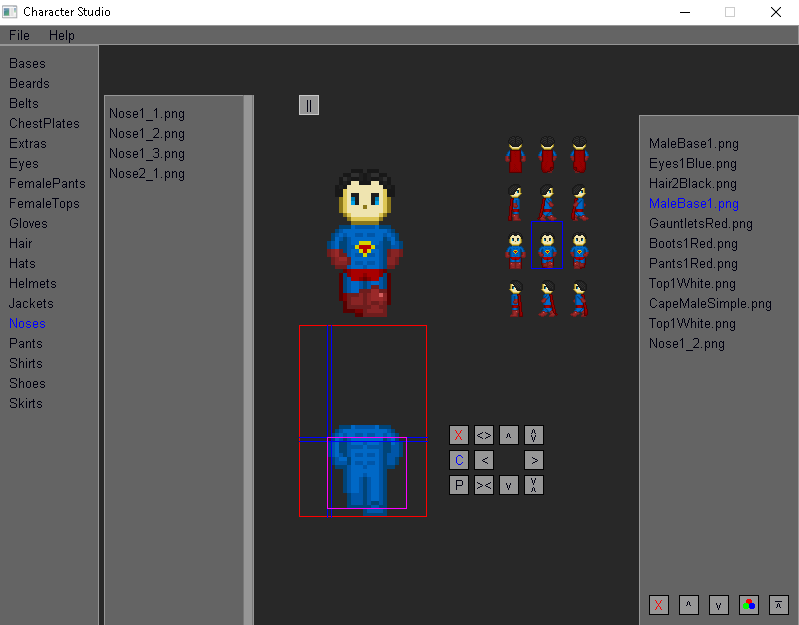 And a couple of screen shots showing a little of its versatility.
I know super man does not wear gloves but I really felt like he did :P
A lot of these sheets were made by modifying other sheets, for instance the symbol on his chest is a whit t-shirt colored yellow and cut down and then another colored red and cut down. and his blue suit is just another body colored blue with the head cut off.

I know I didn't bother finishing Harleys hair because of laziness.
The tool has frame editing features like Move frame, Stretch frame, Copy/Paste, and selection delete
It also features a color swap program where you can take the colors already in a sheet and switch them for other colors.
I'm almost finished with it and hope to have it released before the end of lockdown

This looks awesome Grindalf! I like the crosshair pixel part, seems to be a pretty handy feature.

Thanks :)
I mostly made the double line cross hairs for the stretching/squashing feature the line of pixels in the center of the lines is what will be duplicated either side of the lines or deleted when you do a horizontal or vertical stretch/squash.
It just looked like fun to make to be honest. Now is the less fun part, hundreds of sprite sheets to go with it :P

Nice. btw, just a bit curious on what 2D/sprite software are you (still) using before you made your custom tools like this one?

Microsoft Paint :P
I've also written a .png exporter for it now in BlitzMax. The b3d program saves the image as a temp.bmp calls the blitzmax program that loads, changes the mask to alpha(if needed) and exports to the selected pathfile as .png

Im sure there is a way to make a blitzmax program run windowless but I cant remember how I did that, at the moment the BMax window pops up for a second while exporting as ping

then you should check out paint.net https://www.blitzcoder.org/forum/topic.php?id=263

Im sure there is a way to make a blitzmax program run windowless but I cant remember how I did that, at the moment the BMax window pops up for a second while exporting as ping

You can find a blitzmax borderless window code somewhere here in the archives.. I remembering posting about this last time.

I figured out the windowless BMAX app thanks.
I occasionally use Paint.net(Normally when I need to add Alpha to a sheet) but I find for the simple quick pixel work that I tend to do paint is so super simple to use that its hard to beat.
I also occasionally use gimp but normally only if I'm adding gradients or some other effect like that.

Sure thing. glad you figured that out.

I occasionally use Paint.net(Normally when I need to add Alpha to a sheet) but I find for the simple quick pixel work that I tend to do paint is so super simple to use that its hard to beat.

Awesome! I also use it for quick editing. Krita also is a nice tool but a bit complex, perhaps it's worth checking out again.

Somebody showed me Krita once and it looked amazing, I completely forgot all about it(Thats me getting old I guess) I should go download and check that out, Thanks :)

Well I have eventually finished Character Studio
https://grindalf.itch.io/character-studio
I also have a video showing me making a character with it


Sorry to all the people that actually watch it and have to listen to my voice :P
After 15 years of gamedev trying to make something good enough to sell, this is the first commercial item I have actually finished...... and its not a game.
I don't expect much from it to be honest(Its more of an RPGMaker type thing and they already have great asset bundles) but in reality I made it for myself and then thought, Hmmm other people might like this so I added a little polish. so even if I never sell a copy its still doing exactly what I made it to do ;)

Really nice work! I also like what you did with your itch.io page background btw, that looks awesome showcasing this tool.

Also, you can add a small 80x32 icon as the first image and then add another tag toolbox and a specific category so it will show up in the toolbox section.