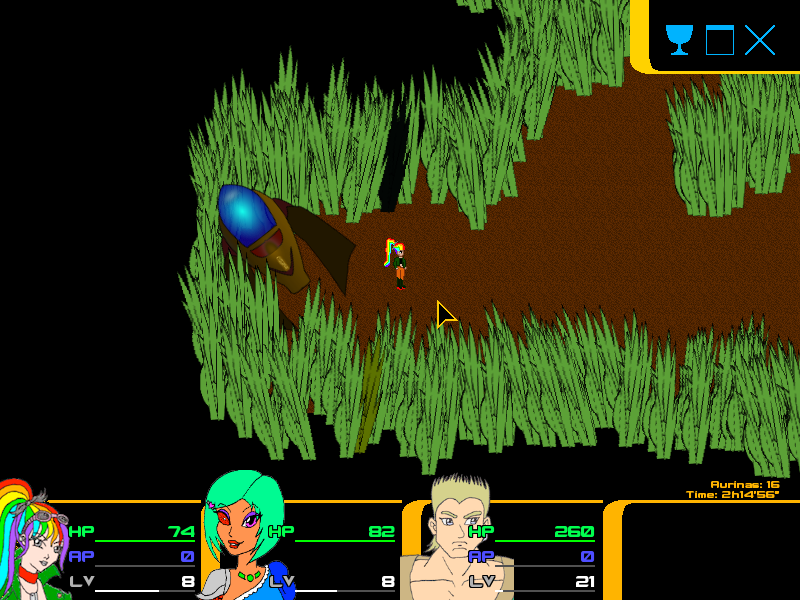 Star Story is not really "new", but it has been designed with LAURA II, which is in turned coded in BlitzMax, using the GALE engine for Lua scripting, and Kthura for the Map engine.

Star Story is a science-fiction RPG game, where a strong story and also a bit of parody to famous science fiction franchises (most notably Star Trek and Star Wars) come together. On the screenshot above we can see Wendicka, the main protagonist after she crashed her space pod on a strange alien planet.

The story starts in a prologue when Wendicka Lovejoy (the main protagonist. A girl who can't eat or drink or touch water, but feeds on electricity) and her surrogate sister Crystal McLeen, two space cadets in training, have their first mission with Lt. Sean Briggs in the Yaqirpa (a kind of church for an alien religion). The mission goes wrong, and Crystal would have gotten herself killed if a mysterious person didn't steal her body from sickbay putting cybernetic implants into it, turning Crystal into a cyborg and saving her life in the process. One year passes and not a single trace was ever found of the person who turned Crystal into a cyborg. Wendicka and Crystal were both so shocked about that incident that they gave up being space cadets. Wendicka became a mechanic for Excalibur (the space station that is also the girls' home), and Crystal became a barmaid in a pub in the same station. All went well until a cyborg invasion forces the girls to flee, protected by the android ExHuRU (Experimental Human Replica Unit), crashing on a strange planet (see screenshot). From here a plot will start leading to great dangers. Who is behind the attack on Excalibur? Why is it that Wendicka cannot eat/drink/wash and must feed on electricity? Who turned Crystal into a cyborg?

click here to find the game on Game Jolt
click here for the Lua scripts LAURA II uses to run this game (and if you find any bugs, you can also report them there).

===
Technobabble about the game's development:

Cool stuff you got there Tricky!

btw, have you also tried pixel art for your images before?

Back then I was "learning" the trade when it comes to pixel art. I did pixel art before back in the DOS era, and back then I used DeluxePaint (originally a drawing program for the AMIGA, but they also ported it to DOS), and sometimes I still use it (the only bummer is that limits me to 256 colors, as the hardware of the time didn't support any better)... having to convert LBM or PCX to PNG is not that hard. :)
These days I use PikoPixel, which is a very simplistic (and therefore very good) program for PixelArt. Downside is... it's only for Mac. I am looking for a good alternative for Windows, but I found none (AseSprite is often named, but a) that is not free like PikoPixel is. They ditched the original GPL and b) AseSprite adds a lot of features that only get in my way).

Truth is that I have always worked with pixel art, as I believe this to be the best way to create art for games in general. Especially when you want to produce a bit of a retro-style (which was one of my focus points in Star Story). I've never really been a master in it, but at least I could produce something acceptable... I think? ;)

Cool beans. Yes, you could try pixel art for your games as I thought it would fit better and make it more refined. The tools and methods now are now much easier to find and use compared back then.